This image shows detail of the Vietnam veteran's monument planned for the Capitol grounds.

Thirty-seven years after it ended, the Vietnam War continues to generate controversy. The latest outbreak is playing out on the Texas Capitol grounds.

Last Sunday, I wrote about progress on the Texas Capitol Vietnam Veterans Monument, scheduled to be dedicated next year. I noted a recent change in which a South Vietnamese soldier in the original design is being replaced by an Asian American U.S. soldier.

It's a change that has deeply upset some people who had been involved in the planning, including Texas' only Vietnamese American state lawmaker.

Robert Floyd, a lobbyist, Vietnam vet and driving force on the project, said the change was made as the project "evolved." The South Vietnamese soldier was included when it was more of a "Vietnam War monument," he said, and removed when it became a monument to Vietnam War vets from Texas.

"We thought it would be better to have an Asian American soldier" than a South Vietnamese soldier, Floyd said, adding, though, that he did not think it was "improper" to have the latter. Floyd is executive chairman of the Texas Capitol Vietnam Veterans Monument committee.

Austinite Nancy Bui was president of the Vietnamese American Heritage Foundation when she was in on the early planning and now is upset that fundraising in the Vietnamese community was done based on the statue that included the South Vietnamese soldier.

"It is an insult," he said of the change.

Floyd denied that the change was related to fundraising in the Vietnamese American community, though he said that amount "probably wouldn't even be 1 percent" of funds raised.

"There was some criticism early on" from people "that didn't think there ought to be a Vietnamese person on there," Floyd said.

Rep. Hubert Vo, D-Houston, told Floyd in a recent letter he wants the South Vietnamese soldier restored. In the letter, Vo noted the seated figure had been described on the monument committee website as "a wounded Vietnamese Ranger representing the wounds and punishment that the people of South Vietnam suffered during America's longest war. He is receiving blood, from an African-American medic. The aid being given to the wounded Ranger symbolizes the aid given and U.S. blood shed to help the South Vietnamese forces and its people."

In the updated design, the figure is described as "a wounded Asian-American Ranger."

Vo wants to know when the change was made and who approved it. "Furthermore," he wrote, "I would like to submit my disappointment for not being included in this process, in spite of my role as a member of the advisory council. These changes significantly alter the monument, removing an important symbolic element concerning the suffering of the Vietnamese, the kindness and heroism of the Texans who came to their aid and the friendship between these two great people. I think this is a mistake."

Floyd has not yet responded to Vo.

Here's something else to mull. It comes from Austinite James Valentine, who opposes the change and has a local friend who served in the South Vietnamese military.

"He has raised his children in Texas and is himself a Texan by any definition," Valentine said. "The fact that he served as an ally and not in the U.S. Army should not exempt him from recognition. ... These Texans served but were not yet Texans. It is a shame not to acknowledge them."

Perhaps if there'd never been a South Vietnamese soldier on the monument there might not have been a clamor to include one. But there was, so now we have a controversy. And why should anything about Vietnam be without controversy?

"It's very difficult to take the politics out of a very political war," Floyd said. 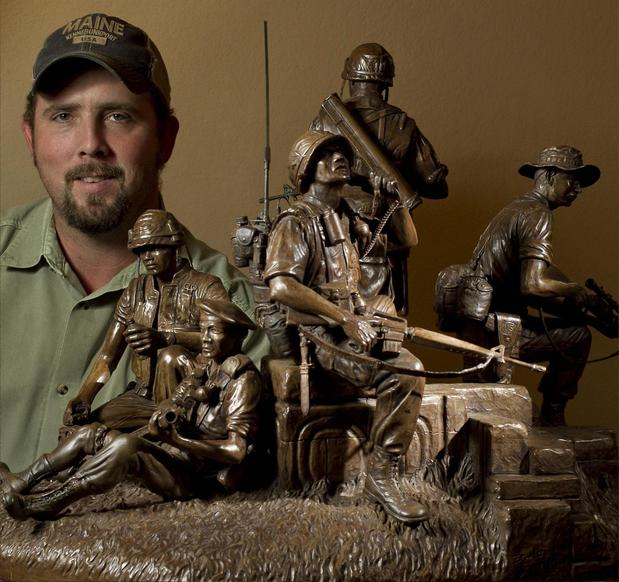 Sculptor Duke Sundt's granite and bronze monument will stand on the Capitol's northeast lawn. Groundbreaking is tentatively set for March. 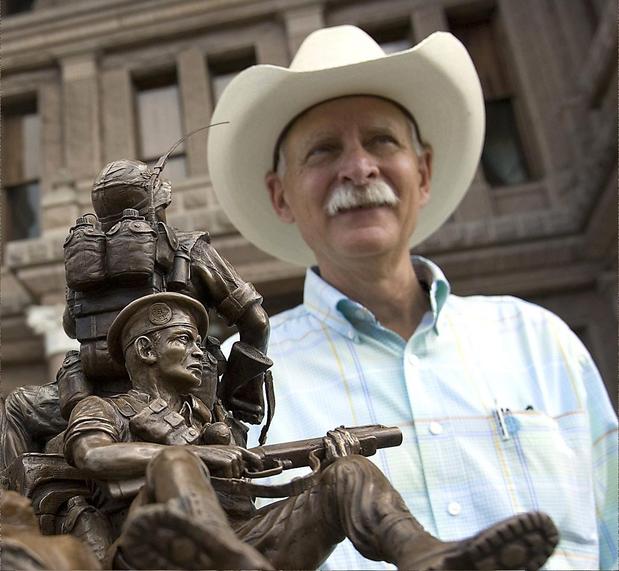 Bastrop foundry owner Clint Howard stands with a model of the Texas Capitol Vietnam Veterans Memorial. It features Asian American, Hispanic, African American, Native American and white soldiers and is slated to be dedicated in the fall of 2013.

Herman: Vietnamese soldier to be omitted from veterans memorial

The Texas Vietnam Veterans Monument, seen here in a model, is planned for the state Capitol grounds. The committee overseeing the project has decided to omit the likeness of a South Vietnamese soldier from the final design.

Upon further review, the decision to build a Vietnam vets’ memorial at the Texas Capitol without including a South Vietnamese soldier stands as previously called.

Here’s the deal, so far, on this monumental controversy: The Texas Capitol Vietnam Veterans Monument committee initially decided on a memorial including four U.S. soldiers of various ethnicities and a South Vietnamese soldier being treated by a U.S. medic.

The thinking, until it changed, was to include the South Vietnamese soldier as a reminder that U.S. forces were over there to help local people fending off aggressors. But as the project evolved, the South Vietnamese figure was removed in favor of adding an Asian American soldier to complete the diversity message on a monument that also has white, black, Hispanic and Native American soldiers.

Some folks liked the change. Some, including Vietnamese American state Rep. Hubert Vo, D-Houston, did not. Letters were written (Vo said the change removed “an important symbolic element concerning the suffering of the Vietnamese”), and meetings were held.

The committee, led by lobbyist Robert Floyd, a Vietnam vet, listened to the respectful opposition (and some from folks who see the removal of the South Vietnamese soldier as part of a communist plot) and made a decision.

“We are sticking with the revised version because we believe it should be a monument that reflects the sacrifice of all Texans,” he said, citing the importance of completing the ethnic diversity by adding the Asian American.

The committee is bumping up efforts to bring attention to a panel on the monument’s pedestal featuring three South Vietnamese soldiers. “One is wounded and is being helped by two of his own countrymen. This panel represents the people of South Vietnam, civilian and military, who shed blood and suffered the direct effects of the war on their homeland,” the committee notes.

Floyd said the panel conveys the message that the U.S. “came to the aid of the South Vietnamese people in a time of need, and not as an occupying country.” Vo told me Tuesday he does not think the panel sufficiently makes the point about South Vietnamese soldiers serving alongside U.S. troops.

Jay Kimbrough, a Vietnam vet and longtime Gov. Rick Perry confidant who wanted the South Vietnamese soldier on the monument, says he’s “disappointed” with the committee members’ decision but respects “their desire to honor and remember those that served.”

“We must honor the fallen, of every generation, forever,” he said.

Correct, and as Floyd told me, “We’re going to move on. We hope that others will, too.”

One other update: The Cynthia and George Mitchell Foundation is giving $2 million to the project. George Mitchell is a Houston-area philanthropist who made his money in energy and real estate. Floyd said the donation puts the committee “very close” to having the money needed to build the Capitol monument and establish a “living monument,” including a website and scholarships.

With the money and design in place, it indeed is time to move on with this important and overdue tribute to the Texans who served in Vietnam, especially the 3,415 who died in a war that continues to generate controversy.

Groundbreaking is set for March 25. Learn more about the project at buildthemonument.org.

You can find out more about the project at

UPDATE: This story has been updated to correct Sen. Juan Hinojosa's party affiliation

WHEREAS, The year 2011 marks the 50th anniversary of the beginning of significant U.S. involvement in the war in Vietnam, and this milestone offers a fitting opportunity to honor Texans who served in that conflict and to recognize those who are working to help erect the Texas Capitol Vietnam War Monument; and

WHEREAS, The State of Texas made a heavy contribution to this country's military effort in Vietnam; of the many thousands of Texans who served in Southeast Asia, 3,415 were killed in combat, and 107 remain missing in action; in addition, Texas is currently home to more than 500,000 Vietnam War and Vietnam War-era veterans; and

WHEREAS, Authorization for the construction of a Vietnam War  monument on the grounds of the State Capitol was made by the legislature in 2005; the sculptor Duke Sundt was chosen to design  the memorial, and a campaign is currently under way to raise the $1.5 million in private funds required for its creation and installation; and

WHEREAS, To further that effort, Patrick M. Reilly, a charter member of Texas Capital Chapter 1919 of the Military Order of the Purple Heart, is traveling around the state, with the assistance of his chapter and along with other veterans, to exhibit a maquette of Mr. Sundt's design; the maquette has previously been displayed at such sites and events as the chamber of the Texas House of  Representatives, the Lyndon B. Johnson Ranch, the Houston Rodeo, and the Vietnam War Symposium at Texas Tech University; it is currently on exhibit at the George Bush Presidential Library and Museum in College Station; and

WHEREAS, Mr. Reilly exemplifies the valor of those who served  in what remains America's longest war; born in 1948 in Oklahoma  City, he joined the U.S. Marine Corps and in 1967, at the age of 19, deployed to Vietnam; during the time he served with Weapons Platoon  of Company H, 2nd Battalion, 5th Marines, 1st Marine Division, he earned the nickname "Rocketman" for his skill and accuracy in operating the light antitank weapon; Mr. Reilly participated in Operations Essex, Auburn, and Hue City before being wounded in the opening hours of the Tet Offensive in January 1968; by the time U.S. and South Vietnamese forces had quelled the massive surprise  assault by North Vietnamese and Viet Cong troops some two months later, all of Mr. Reilly's close friends had been killed, and not a single marine who had been in his platoon when he arrived in-country remained present for duty; the injury that Patrick Reilly had sustained necessitated the amputation of his right leg, and he has since worked intensively with the U.S. Department of Veterans  Affairs to improve prosthetic services for veterans; and

WHEREAS, Nearly four decades have now elapsed since the end of the Vietnam War, but the passage of time can never diminish the debt that Americans everywhere owe to those courageous individuals  who bore the strife of battle in answer to their country's call; the raising of a memorial at the State Capitol to the bravery and  sacrifice of Texas Vietnam veterans is indeed deserving of support by every citizen of the Lone Star State; now, therefore, be it

RESOLVED, That the House of Representatives of the 82nd Texas Legislature, 1st Called Session, hereby commend Patrick M. Reilly and the members of Chapter 1919 of the Military Order of the Purple Heart for their efforts to bring the Texas Capitol Vietnam War Monument to fruition; and, be it further

RESOLVED, That an official copy of this resolution be prepared for Mr. Reilly and for Chapter 1919 as an expression of high regard by the Texas House of Representatives